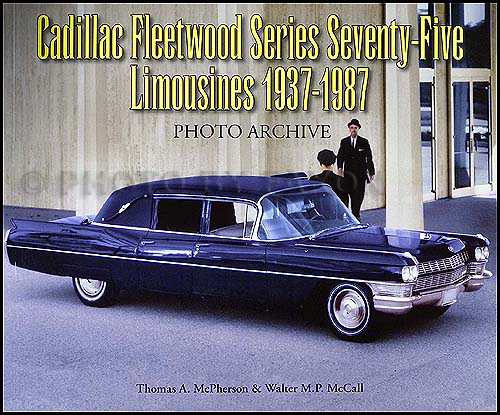 Tweet
Take a pictorial journey through Cadillac's golden era of luxury! This book documents the Fleetwood Seventy-Five models with photographs of the cars for every year from 1937-1987. Inside you'll find brief descriptions of the vehicles and their history as well as black & white photos and illustrations on every page. It also includes a dozen pages of color pictures. You'll see exterior images of both limousines and seven- eight- and nine-passenger sedans. You can also find out about special models, including the 1949 concept car and the 1959 "Broadmoor" show car, as well as the 1964 Landau roof option. You also get a model chart with the model numbers, model name, original price, and production figures. Includes 7, 8 and 9 passenger sedans and limousines, in all styles including Touring, Imperial, Business, and Formal. Most of the cars featured in the book are Cadillac factory models, but there are a few cars by other coach builders, such as a 1941 15-passenger Eureka bus, 1947 and 1948 Derham models, a 1948 airline limo by National, as well as 1975 and 1977 Hess & Eisenhardt Security Cars. You'll even see special celebrity cars such as President Truman's 1947 limo, the 1947 Derham Papal Throne Car, Queen Elizabeth II's 1959 "Royal Tour" Limousine, 1960 Hess & Eisenhardt cutom limo for the DuPont family, and the King of Morocco's 1962 9 passenger convertible. The book is in BRAND NEW CONDITION! Buy now to own the best photo-archive for your Limo.
Thomas A. McPherson and Walter M.P. McCall
"Cadillac Fleetwood Series Seventy-Five Limousines 1937-1987 Photo Archive" by Thomas A. McPherson and Walter M.P. McCall
128
8.50 x 10.50 x 0.31 inches
You can be the first one to write a review.
Write a Review