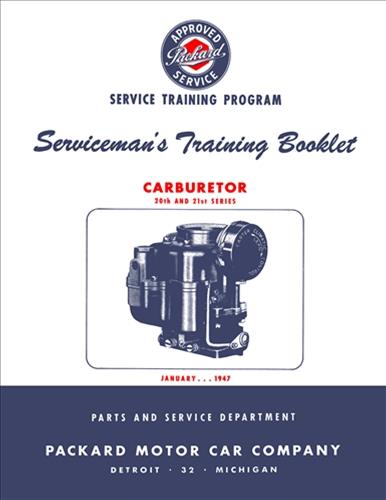 This manual was written to train dealership mechanics to work on carburetors. You will find explanations of how Packard carburetors work, along with instructions for removal, installation, adjustment, disassembly, and assembly.

The book begins with a detailed illustrated explanation of how these carburetors work and the differences between them.  You then get detailed illustrated carburetor adjustment instructions, including float level setting, pump stroke measurement, and adjustments to the pump stroke, metering rod, anti-percolator, fast idle, unloader, and lockout.  You get written instructions for disassembly, cleaning & inspection, then reassembly of each carburetor, along with a few pages of troubleshooting instructions.  There is a page of specifications on each carburetor.

Buy now to own the best manual for your carburetor.

"Service Training Program Serviceman's Training Booklet Carburetor 20th and 21st Series"
44
Sold Separately
This item is a reproduction
10.75 x 8.20 x 0.15 inches
PD94649QCA11FLY1PFC
You can be the first one to write a review.
Write a Review