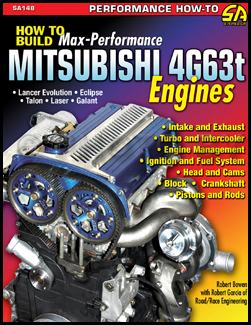 Tweet
This is the first book to focus specifically on the 4G63t engine, so it really focuses on the horsepower that you care about. It's not uncommon to find one of these four-cylinder, iron-block, aluminum-headed, 2-liter turbocharged monsters making more than 1,000 horsepower with the right modifications and tuning well above the 200-300 hp produced in the factory-made engines. The 4G63t has more than a cult following among sport-compact enthusiasts, who know and respect this engine's immense performance potential at the track or on the street. Up until now, in-depth performance information on the 4G63t has been hard to find. For this book, author Robert Bowen went straight to the source, Robert Garcia of Road/Race Engineering in Santa Fe Springs, California. RRE is the most well-known and respected Mitsubishi turbo performance shop in the United States, and Garcia is its in-house engine builder. Mitsubishi enthusiasts will benefit from Garcia's expertise and be able to build better, stronger engines than ever before. This book covers every system and component of the engine, including the turbocharger system and engine management. More than just a collection of tips and tricks, this book includes a complete history of the engine and its evolution, an identification guide, and advice for choosing engine components and other parts. Profiles of successful built-up engines show the reader examples of what works, and the book includes helpful guidance for choosing your own engine-building path. These engines originally came in the Mitsubishi Galant VR-4, the Mitsubishi Eclipse, Eagle Talon, Plymouth Laser, 2003-2006 Lancer Evolution VIII and IX, as well as 1992-2002 Evos sold outside the US. This 8.5 x 11 inch book has 144 pages and 400 black and white photos. New condition Don't spend your hard-earned cash figuring out what works and what doesn't - pick up this book and know for sure.
Robert Bowen
"How To Build Max Performance Mitsubishi 4G63t Engines"
144
11.00 x 8.50 x 0.31 inches
You can be the first one to write a review.
Write a Review