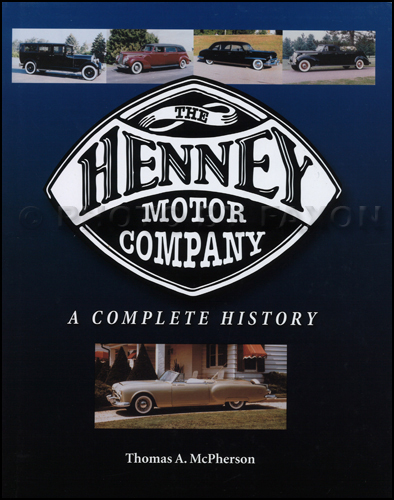 Tweet
This definitive book details the history of the Henney Motor Company and includes over 400 illustrations. Find out how the company changed year by year, including which models it produced, which chassis the models were based on, how they fared against competitors like S&S and Miller-Meteor, marketing strategies, and the financial state of the company. Collectors will appreciate the appendixes which include year by year production figures and guides to decoding serial plates from 1935-1954. You’ll also see a list of original chassis used along with prices, for 1928-1954 models
Initially assembling its own complete vehicles, Henney mounted its premium-quality hearse and ambulance bodies on diverse. The harsh economic climate of the 1930s brought Henney and Packard together, Henney hitching its wagon to the Packard star to become the sole American professional car builder authorized to use the prestigious Packard commercial chassis. This exclusive arrangement eventually evolved to a point where—in addition to its famed funeral coaches and ambulances—the Henney Motor Company was also building seven-passenger sedans, limousines and concept cars for Packard as well as special limousines for the White House. This book details Henney’s groundbreaking innovations like the hydro-electric vehicle leveling and casket tables, airport limousines, sedan-ambulance conversions, flower cars, air conditioning, graveside music, North America's first modular ambulance, even an air ambulance. After the Freeport, Illinois plant closed in 1955, the Henney name was resurrected for use on the first modern electric-powered automobile in America—the Henney Kilowatt. The only definitive book ever published on Henney and its fabled relationship with Packard, this book is also the story of a pioneering American company, its charismatic leaders, wide array of products and the unique segment of the motor industry in which it was involved.
Thomas A. McPherson
"The Henney Motor Company: A Complete History"
272
11.00 x 8.50 x 1.00 inches
You can be the first one to write a review.
Write a Review