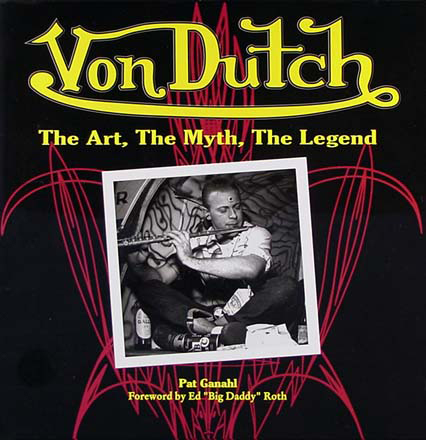 Tweet
BPat Ganahl, with foreword by Ed "Big Daddy" Roth. Von Dutch is more than just a patch on some trendy celebrity's trucker cap; he was a beatnik artist and pinstriper who became a pivotal figure in hot rod history and pop culture. Considered the founder of "modern" pinstriping, he was a prominent character in many of the rodding magazines of the late ‘50s, and his fame endured long after he apparently tired of it. Besides being a striper, he was a gifted artist, machinist, and gun- and knife-smith. Using stories and quotes culled from interviews, vintage photos, and images of the art and other works he left behind, this book chronicles Kenneth Howard's life from pin-striping beatnik to bus-dwelling hermit. Where it can, this book sets the record straight on Von Dutch the man, but in many cases conflicting stories will serve to illustrate the contrary, colorful, and sometimes difficult nature of Von Dutch the legend. The stories about Von Dutch are entertaining - striping a car for ten days straight, firing a canon out of his living-room window, fleeing California after shooting at a police helicopter, conversing with invisible Martians; Ganahl does his best to sort out fact from fiction. The detailed text is accompanied by over 100 color & 200 black & white photographs. The hardcover book measures 10" x 10" and is in BRAND NEW CONDITION! Buy now to own this must-have for fans of hot rodding & hot rod culture!
Pat Ganahl
Von Dutch: The Art, The Myth, The Legend
192
10.00 x 10.00 x 0.38 inches
You can be the first one to write a review.
Write a Review