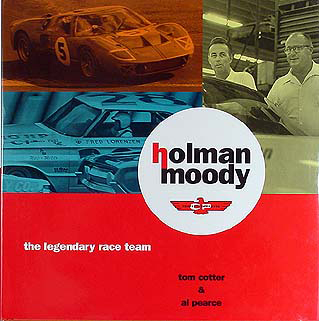 Tweet
"Holman Moody: The Legendary Race Team" by Tom Cotter & Al Pearce. This is an unprecedented telling of one of racing's greatest stories. Authors Tom Cutter and Al Pearce chronicle the team's rise and fall with sharp prose and memorable quotes from the racers who spent time with the team, as well as the movement from stock car racing into drag racing, sports car racing, European rallying, and the construction of a massive facility that employed more than 300 people in its heyday. The book also covers the key drivers in the team, including the short, successful career of Fred Lorenzo, David Pearson's two consecutive NASCAR championships, the Can-Am days with Mario Andretti driving Paul Newman-sponsored cars, and Bobby Allison's time with the team. You'll also find out about Lee Holman's efforts to continue the company's legacy by building continuation GT40s, as well as Holman-Moody's powerboat and drag racing forays. Historic photographs - many of them from the collection of top motorsports photographer Don Hunter - take the reader on the track, in the shop, and behind the scenes of the 1960's greatest race team. Half the photos are in color, and half are in black and white. You'll find lists of Holman-Moody NASCAR results, year by year from 1957-1973, along with lists of all Ford and Mercury victories from 1958-1971. The hardcover book measures 10.25" x 10.25", has 290 pages, and is in BRAND NEW CONDITION! This book is the winner of the 2003 Gold Award in Motorsport History category at the Automotive Media Awards. Buy now to own this landmark book.
Tom Cotter
"Holman Moody: The Legendary Race Team"
10.25 x 10.25 x 0.58 inches
You can be the first one to write a review.
Write a Review