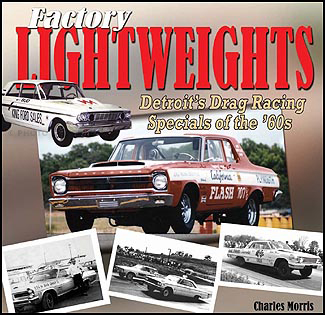 Tweet
"Factory Lightweights: Detroit's Drag Racing Specials of the '60s" by Charles Morris. When Detroit's automakers got involved in organized drag racing, they issued a series of rare race-only cars that became legends in their own time. Unbound by warranty and durability concerns, these wild cars featured lightweight additions such as fiberglass and aluminum body parts, Plexiglas windows, and many more weight-saving tricks. Under their hoods were wicked, raucous engines that only felt at home on the quarter mile. This book includes descriptions of the parts, as well as race ‘packages’ available to the public as well as to stock car racers. It includes not only lightweight body parts, but a variety of tricks used to get lightweight racers – like aluminum engine parts, and stuffing a big-car engine into a little-car body.

The book explains how the Big Three came to build these insane cars and describes, in detail, the cars and engines that helped make the 1960s such a unique era in drag racing history. A huge collection of period photographs, many previously unpublished, captures the spirit of the times and shows readers how these cars looked as they ran-particularly important, given that so many of them have been lost to history. This 9 x 9 inch softcover book has 180 pages, with 250 color and 150 black and white photos. Buy now to find out about these ultimate muscle cars.