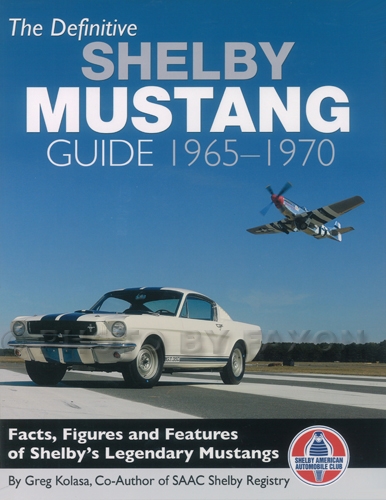 Tweet
What really makes a Shelby a Shelby? This new book from Shelby American Auto Club (SAAC) historian and registrar Greg Kolasa details the specifics on the performance and appearance alterations with both descriptive text and superb photographs.

This book gives a detailed look at both the performance and styling characteristics of each year of the 1965-1970 Shelby Mustangs in text, photographs, and charts/graphs and clears up many myths and misconceptions surrounding these legendary pony cars. In addition to his firsthand knowledge, Kolasa relies heavily on factory documentation and interviews with Shelby American designers, engineers, stylists, fabricators, and race drivers to get the true, as-it-happened story of these phenomenal pony cars. Additionally, the cars included in the book were chosen specifically for their historical and technical "correctness." The three appendices are especially helpful in identifying colors, specifications and serial number tags.

This handsome paperback book both reveals the compelling story of the of Shelby as well as an unprecedented level of descriptive detail of the equipment. Buy now to buy the best guide to Shelby originality.
Greg Kolasa
"The Definitive Shelby Mustang Guide 1965-1970: Facts, Figures and Features of Shelby's Legendary Mustangs"
191
11.25 x 9.00 x 0.60 inches
You can be the first one to write a review.
Write a Review