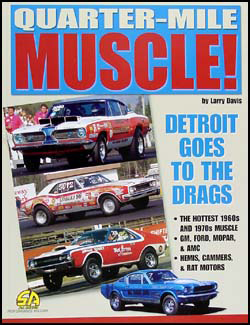 Tweet
"Quarter-Mile Muscle!: Detroit Goes to the Drags" This book covers the development and success of muscle cars at the drags in all classes, from Super Stock to the early muscle-car based funny cars from 1964-1972. In 1964, the GTO's mid-size body and full-size engine created successes on the strip and in the showroom that inspired a generation of muscle and pony cars. Author Larry Davis was there, and his personal recollections round out the stories of the NHRA and AHRA drag races. He details the factory performance equipment available for each of the muscle cars in each year, devoting an entire chapter to each year, explaining how the equipment changed and special racing parts that were available even from the dealer. He covers the big muscle cars in drag racing: Dodge and Plymouth 426 Hemi cars, including Barracuda, Dart, Coronet, Coronet R/T, Charger, Belvedere, Satellite, RoadRunner, and GTX; Ford's Fairlane GT & GTA, Comet, Mustang, Shelby, and Mustang Cobra Jet; Chevy Chevelle Malibu SS396, Camaro Z-28, the fiery little Chevy IIs with 327 engines, and even the occasional El Camino; Pontiac GTO & Firebird, Buick GS & Stage 1, Olds 442, and AMX. Special attention is paid to low-production factory cars that were intended specifically for the drags - cars like COPO Camaros, Ford Thunderbolts, and the dealer-built specials from Yenko, Motion, and others. Chock full of 200 color photos and nearly 100 black and white photos 128 pages 8 1/2 x 11. Buy now for the best history of the muscle car at it's most muscular! 1964 1965 1966 1967 1968 1969 1970 1971 1972 This out of print book is still in new condition.
Larry Davis
"Quarter-Mile Muscle!: Detroit Goes to the Drags"
128
11.00 x 8.50 x 0.25 inches
You can be the first one to write a review.
Write a Review